In western civilization, poetry has long been considered the most artful form of the written word. As classical educators, there’s very little we can do that deepens our appreciation of words and their power more than dedication to great poetry and poets. The “Know Your Poets” series will tell the life story of various poets while also introducing the nature and themes of their work.

“I am sure the snarling
Beasts could never bungle
Life as men do, darling,
Who half know.”
Launa Dee

Mark Twain famously called the second half of the nineteenth century “The Gilded Age.” The word “gilded” describes an object overalayed with a thin layer of gold, and Twain’s nickname for the years after the Civil War indicates that life in the “The Gilded Age” may have sparkled on the outside, but those glitters obscured a dark reality. Richard Hovey’s poetry embodied the distaste that many Americans felt for those trying to preserve America’s gilded appearance, and instead appealed to genuinely American values which could lead to a better American life.

He was born to Charles E. Hovey in Bloomington, Illinois on May 4th, 1864 shortly after the war. In the years before the Civil War, Charles E. Hovey, a teacher by trade, worked to improve the condition of education in Illinois in multiple ways including helping to form Illinois State University. When the Civil War broke out, Charles E. Hovey enlisted and led troops from Illinois bravely against the Confederacy. He gained notoriety for his bravery in battle, but ultimately his wounds forced him to retire before the end of the war. In the latter half of his life, he successfully practiced law in Washington D.C.

Charles E Hovey represented the model of a gallant, respected middle class citizen. Richard Hovey, on the other hand, struggled to find a job after graduating from Dartmouth College even though he was the only member of his class to graduate cum laude. Hovey’s biographers attribute his failure to find secure work to his desire to be an American Oscar Wilde with long hair, big hats, and a wild beard which made him a curiosity in normal society. Though brilliant, Hovey drifted through life with seeming purposelessness, living in poverty despite his artistic talent, dropping out of seminary after only one year, refusing traditional work to take walking tours, and a number of other eccentric choices which appeared to distinguish him from his gentleman father.

But despite their differences, Hovey remained close to his father; similarly, though Hovey refused to conform to social norms, he did not reject all conventions and political ideas. He saw the rejection of social norms as a means by which he could pursue greater ideals. This sentiment, found frequently in Hovey’s poetry, echoed his Transcendental forefathers whose work had so permeated American thinking by his time.

Hovey expresses this duality most clearly in his three volumes of poetry he produced alongside Bliss Carmen called, Songs from Vagabondia, More Songs from Vagabondia, and Lost Songs. Hovey’s volumes capitalized on the popularity of the concept of vagabondage in broader American culture. During the Gilded Age, the upper and middle classes despised vagabondage because political figures blamed societal evils on vagabonds and media outlets published exaggerated headlines vilifying the vagabond. This fear continued to increase in the wake of the economic crisis of 1893 when an army of vagabonds banded together and marched on the nation’s Capital. Hovey’s poetry subversively embraced the concept of “vagabond” in order to question the values that average Americans embraced. He was convinced that those who blindly adhered to the status quo in order to achieve respectability would fail to live life according to true higher values.

Hovey also communicated his affinity for higher values, but disapproval of superficial respectability in his book, Lancelot and Guenevere: a poem in dramas. Hovey’s decision to follow the likes of Alfred Lord Tennyson in recasting the Arthurian legends, at first glance, appears to betray his uniqueness. But on closer examination, Hovey’s Guinevere stands out with the attitude and persona of a modern, American woman. In contrast, Tennyson’s Guinevere plays a somewhat passive role more typical for the Arthurian Legend. Also, Hovey chooses the character Taliesin, a bard in King Arthur’s court, as his ultimate hero. Taliesin was one of the first notable poet heros, and this character made it possible for authors like Joyce and Fitzgerald to write poet heroes into their novels.

The final years of Hovey’s life maturely manifested these two aspects of Hovey’s life. On the one hand, he staunchly supported the Spanish-American War; he was the first person to write “Remember the Maine” in poetry. He  saw America’s involvement in Cuba as an overturning of the pernicious status quo and the success of higher American values. On the other hand, while in London, he met Maurice Maeterlinck a Dutch playwright influenced by the Symbolist movement in France and impressed by Hovey, Maeterlinck asked him to be his English translator. His translations of Maeterlinck’s plays contributed to the growing  influence of the Symbolist school. Initially influenced by French translations of Edgar Allan Poe, the Symbolists felt that art ought to move beyond mere representation and run parallel to reality expressing the feelings that reality evokes, and Hovey’s natural inclinations found accord with the Symbolist movement. Unfortunately, Hovey died at the young age of thirty-four after a failed routine medical operation. In Hovey’s short life, however, he achieved a notoriety that few American poets would surpass. His notoriety grew immensely from his first public recognition when a professor picked him out of a crowd because he looked like Dante Alighieri and climaxed when he was awarded for his poetic achievements by the wife of one of his heros, Sidney Lanier. One biographer pointed out that all modern verse is a blend of Walt Whitman and Emily Dickinson, and if that is true, then Hovey is one of the first poets to blend these two voices into truly great American lyrics.

Shane Saxon serves as the School Representative for Trademark Schools for the Classical Latin School Association, and in that capacity, helps to work with communities around the country to start Highlands Latin cottage and full time schools. He also teaches composition and literature at the Highlands Latin Cottage School in Louisville, KY and writes for Memoria Press’ The Classical Teacher. He holds a B.A. in English, and both an M.Div. and a Th.M. from The Southern Baptist Theological Seminary. 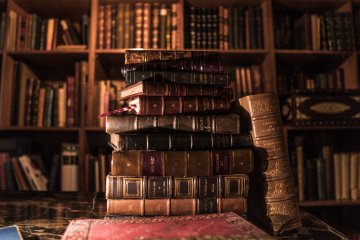