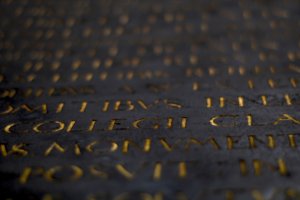 The Greek government, in an attempt to reform education, has decided to drop Latin and replace it with sociology, and a few people are not very happy about it. But the interesting thing is the reason critics are giving for keeping it. According to the account at ekathimerini.com:

Education Minister Costas Gavroglou faced a barrage of criticism Tuesday after announcing his intention on Monday to scrap Latin from the Greek school curriculum as part of his ministry’s plan to overhaul the country’s secondary education system and university entry exams.

The Philosophy School of the University of Athens it slammed the decision as “completely wrong and anachronistic,” saying it will deprive Greek students of knowledge that forms part of the European identity.

… “Both learning the Latin language and the study of Latin literature and the Roman civilization are essential prerequisites for Greek pupils to form a complete European cultural identity.”

In other words, the assumption among the critics is that European culture is dependent upon a dual emphasis on its Greek and Roman antecedents. It is something not irrelevant to Americans, since American culture sprang from European culture.

Tasoula Karageorgiou, president of the Panhellenic Union of Philologists, agreed: “Greece,” she said, “is the cradle of classical education and we are downgrading this subject [Latin].”

Signatures are being collected to reverse the decision. Read the article here.