The Example of Cicero 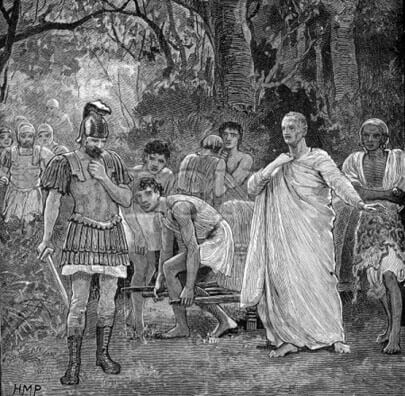 On this day in 43 BC, the great Roman statesman Cicero was assassinated by followers of the Triumvirate. The group of three consuls–Marc Anthony, Octavian, and Lepidus–had named Cicero an enemy of the state because of his defense of the Roman Republic against those who were pushing for an imperial form of government.

Cicero was tracked down on his litter and beheaded in the street.

The discovery of his letters by Petrarch in the fourteenth century ignited an interest in Cicero’s writings that helped to bring about what we know today as the Renaissance and would not exhaust itself until well into the twentieth century. His letters, essays, and orations, many of them gathered from monasteries across Europe, would become the focus of the classical education that predominated in schools in Europe and America.

Cicero was a Stoic, a school of ethics popular among many Romans which was centered on personal self-discipline and practical virtue. The beliefs of the Stoics were acknowledged by Christian thinkers to be useful but incomplete. They accepted the cardinal or practical virtues of the classical world (justice, courage, temperance and prudence), but saw them as being completed and perfected only by the Biblical and theological virtues of faith, hope, and charity.

I remember a lecture I heard at Georgetown University a number of years ago in which the professor, speaking to a roomful of classical teachers, said that if he had one piece of advice for them, it was to “bring back Cicero.” Even today the common sense, practical wisdom he taught and his inspiring example of statesmanship and courage remain a monument to the idea of practical virtue.

You can read about Cicero and other great men and women in the Classical Core Curriculum‘s classical studies program.