The Backward Thinking of Abraham Lincoln

Abraham Lincoln was a backward thinker. His mind wasn’t just in the present. Nor was it just in the future. He considered the past, letting it influence his actions, and even staking his life on principles set down by people whose bones had bleached long before he was born.

I want to share a virtue we can learn from Lincoln’s backward thinking: the audacity of principle.

Why Teach the Gettysburg Address?

Having been assassinated by a shot to the head, Lincoln was buried in his family plot on May 4, 1865, over one hundred and fifty years ago. Two years earlier, after 7,058 soldiers died in the hills and ridges of Gettysburg, he delivered the greatest speech made by an American statesman, the Gettysburg Address. Until recently, schools required students to memorize this speech. The Common Core still requires a “close reading” of it.

Why is this brief, 300-word speech, still taught today?

Some people value the Gettysburg Address as a historical artifact, an interesting relic from America’s past. Others think that it should be taught simply because it’s a great model for speechwriters. The creators of the Common Core Standards assert that the ultimate benefit of studying the Gettysburg Address is to “develop college and career ready skills.”

I’ll add one more reason we should value the Gettysburg Address: because it teaches us to think like Lincoln. Specifically, it teaches us to set our political compass by wise and virtuous principles, and not by lust for winning.

We need look no further than the first sentence, where Lincoln directs his listeners’ imaginations 87 years into the past: “Four score and seven years ago our fathers brought forth on this continent, a new nation, conceived in Liberty, and dedicated to the proposition that all men are created equal.” He is referring to the year 1776, the year of America’s birth and the Declaration of Independence. Why look back then? Because it was for the sake of the nation, founded as it was in the principles set down in the Declaration, that the men who died at Gettysburg had given “the last full measure of devotion.” 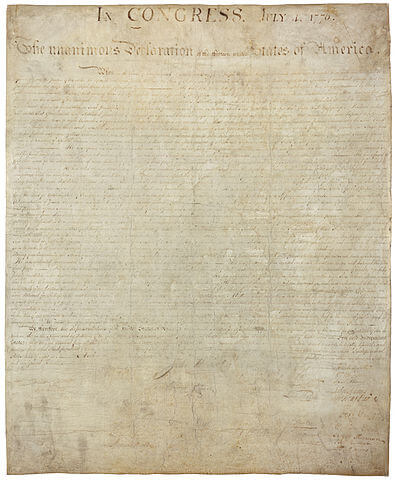 other words, Lincoln was saying that what had been written down in the Declaration was worth dying for. Although he could have pointed to other  motives for the war that permeated the North at the time (e.g., economic superiority and political power over the South), Lincoln ascended an old, out-dated platform of parchment measuring 24¼ by 29¾ inches.

What’s striking about Lincoln’s platform is that it stirred up more division than support, and Lincoln made no apology for it. When confronted with the “slavery problem,” as it was referred to, Lincoln took a firm, audacious stand–audacious because it wasn’t just political but moral–that split the nation.

One of his opponents, Stephen Douglas, ran on a much more popular platform, palliating voters in the North and South and down-playing the slavery problem by upholding the doctrine of “popular sovereignty,” which made slavery an issue to be decided by individual states, not the federal government. Douglas asked Lincoln why he could not mind his own business, leaving the nation “part slave and part free,” continuing “as our fathers made it forever?” Lincoln’s reply gripped Douglas by the horns:

Many of the Founding Fathers expected and hoped for slavery to die away. They had written the Constitution with this hope in mind, i.e., they kept the word “slave” out of it so as not to give legitimacy to slavery; they a set date when the slave trade could be abolished; and when they referred to those in slavery, they called them “persons.” Unfortunately, their hope had been foiled by the invention of the cotton gin and the South’s dependence on a cotton-producing, slave-based economy. The tide had turned the wrong way, but many Americans in Lincoln’s day accepted it without reservation, even in the North. They had abandoned, or at least forgotten, the principle upon which the Founders had set their aim and hope, that “all men are created equal.” But not Lincoln.

The Audacity of Principle

When others in the nation were pandering to the populace and current interests, cautiously tiptoeing around the slavery issue, Lincoln audaciously called Americans to make a decision based on principle, to dedicate themselves anew to a proposition written down 87 years before, and to think backward, so that their nation might endure in the liberty in which it had been conceived and to which it had been dedicated.

In the current political scene, we see few politicians who imitate Lincoln’s policy of principled statesmanship. We see many, however, who are bold about winning. They may be audacious, but they are so merely for the sake of audacity. I warrant we’ll see many who had big wins have an even greater fall one day. Their high-flying achievements will topple, because they were built on the principle of audacity, and not the audacity of principle.

I’ve pointed to Abraham Lincoln as a man of principle we can learn from. This semester, I happen to be teaching students in an American Government class, and I am constantly trying to point them to people like Lincoln. Who would you point students to?