A Whole View of Cursive

More and more articles are appearing that recommend the benefits of cursive writing. Unfortunately, they are of two kinds: those that point to research about cursive’s neurocognitive benefits, and those who extol it as a virtue–and neither seems to know about the other. 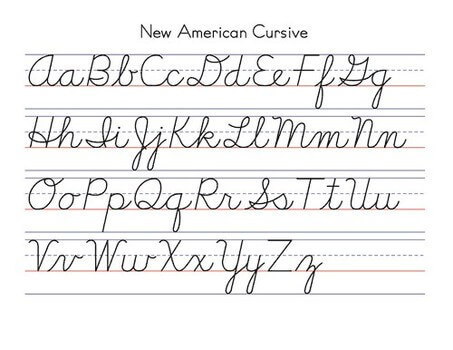 Emanuella Grinberg, writing at CNN.com, points to the science:

Research shows that teaching handwriting skills benefit cognitive development and motor skills, and can lead to improved writing skills and reading comprehension. In other words, children not only learn to read faster when they learn to write by hand first, but research suggests they are also better at generating ideas and retaining information than children who do not practice handwriting.

She also points to studies showing that, “[w]hen children wrote text by hand, they produced more words faster than they did on a keyboard and expressed more ideas,” and that taking notes longhand rather than on a laptop improves retention.

But then we have the winsome Mark Oppenheimer, writing in The New Yorker,

My children know how to print their letters. And they type frighteningly well. Still, I can’t escape the conviction that cursive—writing it and knowing how to read it—represents some universal value.

He relates his attempts to defy the gods of technology by writing in longhand to his daughter at summer camp, who, despite having to resort to occasional consultation with a camp counselor for interpretation, is still appreciative. He also writes lovingly of the personal satisfaction of time spent creating something beautiful.

But he seems completely unaware of the cognitive benefits of cursive, as he writes (on his computer), “There is no empirical evidence that writing by hand is cognitively superior to keyboarding.”

Perhaps if he had written this out in longhand, he would have had the opportunity to think it through a little better.

As divergent products of C. P. Snow’s Two Cultures–one, the sciences and the other, the humanities–neither writer alone seems to see the issue of how we write and what we should teach in all its dimensions. If we could only think of this and other educational issues with both sides of our mind, we might see them a little more clearly.